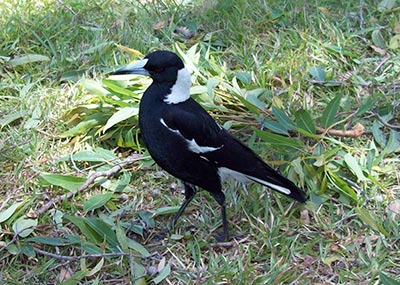 Every year Bird Removal Services takes a large volume of calls regarding swooping magpies right across South East Queensland. Generally beginning in August and lasting through to as late as November a small percentage of breeding male magpies become highly defensive displaying what is often referred to as “aggressive” behaviour towards anyone that enters their established nesting territory. This “aggression” is a response to a perceived threat to the nest which that particular male is responsible for. The public is often divided when it comes to the most effective means of managing such birds with calls for birds to remain untouched often as loud
as those wishing to see an animal destroyed.

Unfortunately many of these swooping magpies can cause serious injury by direct contact with the head and face with the eyes a particular concern. Occasionally swooping magpies are responsible for a panicked response by the targeted person resulting in secondary impact such as hitting surrounding infrastructure or crashing a bicycle for example. A recent situation involved a panicked child who unfortunately ran in front of a vehicle resulting in fatality. On the other hand public awareness of individual nesting territory dynamics can lead to the extent of human interaction being greatly reduced by simply moving through a birds territory in a particular manner or avoiding it all together for the breeding period.

Bird Removal Services provides management strategies through case by case assessment of the site dynamics surrounding your magpies defensive response. Birds that are making contact causing injury or increased risk thereof are automatic candidates for removal where the assessment deems alternatives to be insufficient. However in some cases assessment may show that an individual birds behaviour is elicited by certain activity, in which case the cessation of that activity may bring the end of the threatening behaviour.

Research conducted right here in Brisbane has shown that relocated birds not only integrate into a new locality successfully but the remaining female and potential nestling birds are usually catered for by a “surrogate” male bird who assumes the relocated birds position in that nesting territory. This bird is highly unlikely to carry on the swooping behaviour and the adoption of the territory sees all birds involved catered for.